Is There a Relationship Between Prospective Students’ Backgrounds and the Graduate/Professional Programs and Majors They Select?

There is a limited understanding of the various considerations surrounding student choice when it comes to graduate and professional schools, along with which majors students select, and how these decisions vary among demographic groups. While previous research has shown that there is evidence that differences may exist in how far students are willing to travel for graduate/professional school, further research of what may motivate these choices, and the potential differences among students of different backgrounds, would provide significant insight into how institutions can focus their recruitment efforts. By knowing which factors are associated with students’ decisions about what and where to study, graduate/professional schools can make informed outreach efforts to attract specific student demographic groups to increase diversity efforts. However, it cannot be emphasized enough that without a diverse pool of applicants, no admissions process can ever meet the goal of advancing diversity within its student body.

A recently published article presents ETS research that draws a connection between known factors that affect students’ decision making; the proportion of the actual graduate/professional school applications submitted to institutions, the respective majors selected by prospective students; and the physical distance students are willing to travel to pursue graduate/professional education. This study explored 2015–2017 GRE® test-taker data, which includes records of sent score reports, as well as demographic and background questionnaire data, such as race, gender, student location and socioeconomic status (SES), to answer three critical questions:

How does the proportion of score reports submitted to the 150 largest graduate and professional schools compare, by gender, race and SES, to the overall pool of GRE test takers who sent score reports to graduate/professional programs?

How does the distance GRE test takers are willing to consider traveling to graduate/professional school differ by gender, race and SES?

Students decide to apply to graduate/professional schools for a variety of reasons and this report reveals that there were differences in the gender, race and SES distributions of score reports sent to different schools and for varying majors. For example, 15% of the 150 largest graduate schools, mostly schools with STEM-focused degrees, receive applications with much less gender diversity than is represented in the graduate school applicant population. Similarly, it was found that there is a low degree of ethnic diversity in graduate school applications submitted for specific majors such as history, library sciences and English-language and literature. These differences may be related to the direct effects of the demographic variables or the indirect effects of other factors. These other factors may include academic reputation, familial influence and campus culture. The results should be more closely examined to uncover patterns that could be a result of limited opportunity or interest for certain subgroups. 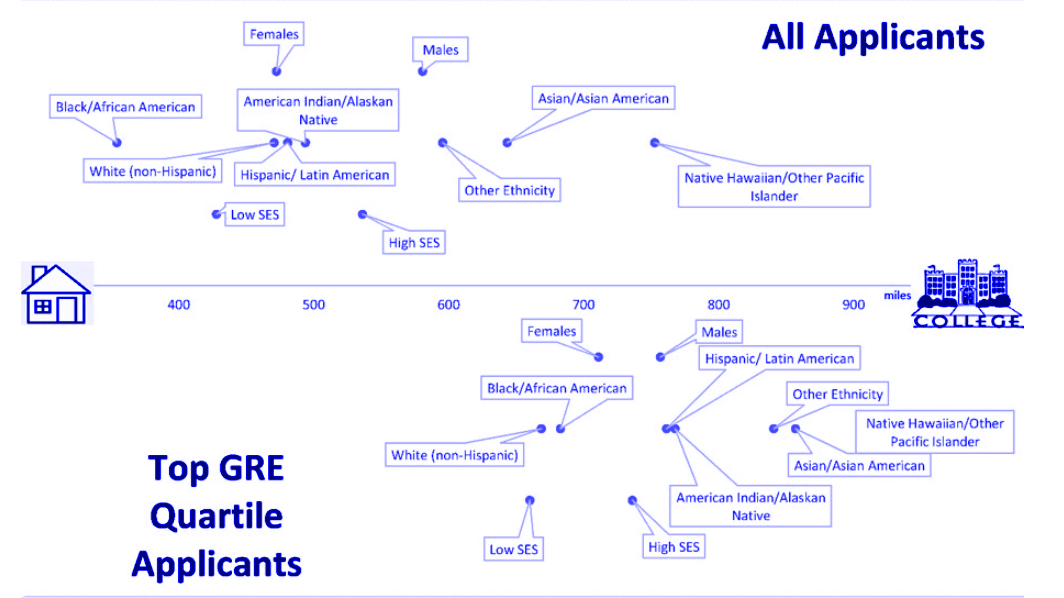 As demonstrated in the figure, graduate/professional programs seeking to diversify their student body should strategically consider the location and mobility of potential applicants when assessing the feasibility of reaching their enrollment goals and identifying ways to better serve students and programs.

Overall, efforts aimed at informing, attracting and recruiting students should be taken to increase diversity among students submitting applications to the schools and majors, especially where limited diversity was discovered. A variety of strategies could be used to achieve this goal. Specific programs could utilize individualized outreach to potential applicants in particular demographic groups to educate them on the availability of options and increase their chances of applying. This outreach could provide additional information and incentives to encourage these students to apply. Furthermore, institutions or foundations could host programs that encourage student interest among specific programs to bolster interest and the number of applications from students from underrepresented groups. Similarly, products that match students with schools can be leveraged to help ensure that institutions have access to students from a wide variety of backgrounds. And likewise, that students have better access to schools that they may not be aware of that would support their opportunities and choice in their graduate/professional studies.

Regardless of the strategy a graduate program or school chooses, by becoming aware of the motivating factors that determine how a student selects a graduate school and their field of study, graduate programs can better meet the needs of students and provide valuable information to support students during their journey. In addition, graduate schools and programs have an opportunity to increase access to information and opportunities for all students which should in theory, help to increase diversity among all applicants. By taking further measures and collaborating with ETS, institutions can take a strategic approach to informing, engaging and welcoming underrepresented students to add to the richness and diversity of the graduate/professional education community.